When arriving in Jordan, every grain of sand on the stained land of the past ten thousand years exuded a deep, slow charm, made people fall in love and then fall in love without even knowing it.
If we used only one word to describe Jordan, that word would be “Sand”. Sand is in a variety of shapes and shades. Sand bounces in the wind along the Jordan River valley, forming a layer of mineral mud on the bottom of the Dead Sea, forming sandstone on mysterious rocky deserts. These sandstone blocks gave birth to a wonder of the world: Petra. Petra ancient city is the jewel of Jordan, has been classified as a heritage by UNESCO since 1985. 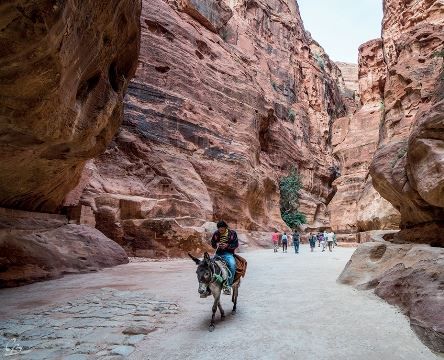 Siq, the 1.2km long canyon, is the perfect entrance to the mysterious city of Petra.
PETRA OF THE YEAR OLD
Petra means “stone”. In the ancient Semitic language of the Middle East, Petra was called Raqmu – “multicolored”. The name really fits this place. The layer of red and red sandstone is inherently beautiful and is decorated with green, yellow, white, black, curving and layered lines, exquisite to the beauty. No one knows when Petra was formed. Only know that this land is located in a prime location for trade, located on the trade route connecting Western Asia and ancient Egypt. Therefore, the Nabateans chose this place as their capital and the city began to flourish in the centuries before and after AD (AD). The Nabateans are an ancient nomadic Arab people, specializing in trade. They are both irrigation engineers and talented architects. 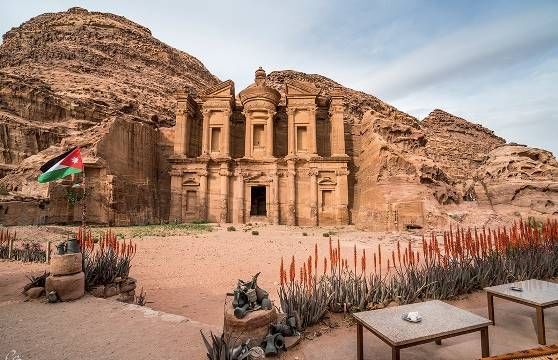 The monastery was built around the 2nd century AD.
Contrary to what I have ever imagined, Petra is very large, spanning dozens of square kilometers. In the heyday, the Nabateans built a busy city with great roads and great works: theaters, tombs, temples … Surrounded by fertile garden fields, irrigated by a sophisticated system of canals, dams and reservoirs. Ancient Nabateans knew how to master water resources and dominate arid deserts like Jordan. For hundreds of years, Petra continued to grow and flourish after being incorporated into the Roman empire, also technical and architectural geniuses. Until the middle of the 4th and 7th centuries AD, strong earthquakes destroyed much of the city. Petra gradually fell into oblivion. 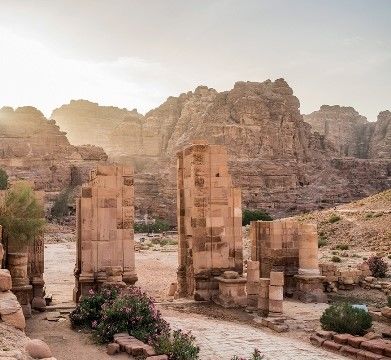 The already beautiful red-rose sandstone layer is decorated with curving lines and layered by nature, so it is beautiful.
WELCOME FULL COURT
Today, although there are many tourists, perhaps the wilderness and tranquility of the desert still overwhelms the flow of people coming here. So Petra is generous and pleasant, not as hustle as other world wonders. I greedily wanted to find myself a completely quiet Petra. So I get up early every morning, come to line up at the ticket gate from 6am and spend the day wandering through the mountain and desert roads. 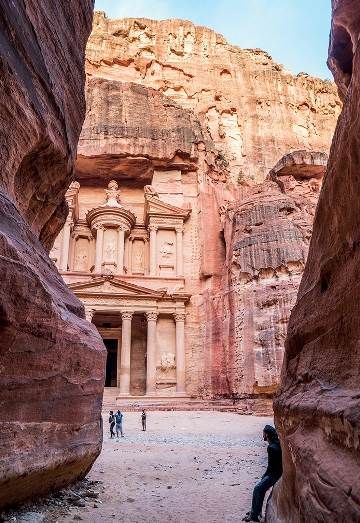 At the end of Siq Road, Al- Khazneh appeared after a turn.
Siq, the entrance to Petra, is 1.2km long, some places are only about 2m wide, leading to the ancient citadel. Siq is a narrow gap, formed between mountains higher than 200m that is split in half during seismic activities, then honed by overflowing river water and wind blows. Around the year 50 AD, the Nabateans, during the development of Petra, built a large dam, bending the Wadi Musa River, preventing it from flowing through Siq toward Wadi Al Mudhlim and Wadi Al Mataha. Siq has since become the most natural, sacred, and wonderful gateway a city can dream of. But then the ancient Petra earthquakes broke the ancient dam. The Wadi Musa stream floods into Siq again. Nature has recaptured Petra. The entrance to the city completely disappeared until the end of the 20th century, when a new dam was rebuilt according to its original design. 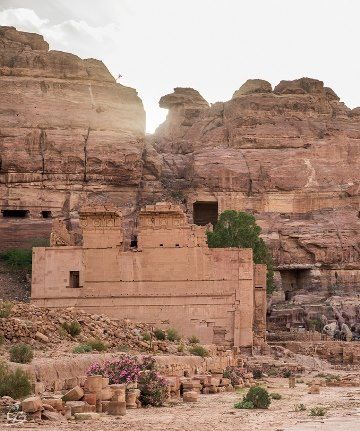 Relics remain after nearly 20 forgotten centuries of Petra.
In the early morning, Siq was completely quiet. The narrow, tranquil path lies under the shadow of steep stone walls that lead us into the sleeping city. At that moment, purple rose shadow suddenly burst in the sunlight right before one of the wonders of Petra, the symbol of Jordan: Treasury, or Al-Khazneh in Arabic, means “treasure “. The name is given by the Bedouins, the only inhabitants of Petra and descendants of the ancient Nabateans. They once believed in the legend that Al-Khazneh was the place where the biblical pharaonic of Exodus hid the golden treasure. 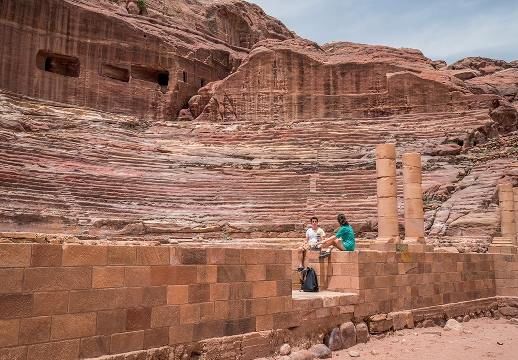 Petra’s theater is completely carved out of rocky mountains.
Although there are no gold and gems, Al- Khazneh is still a truly perfect architectural treasure. Although it was prepared in advance, but when Siq lifted the final veil and Al-Khazneh appeared before my eyes, I was still completely surprised and overwhelmed. Al-Khazneh was built in the 1st century BC, nearly 40m high. The whole building is carved into the face of Petra’s characteristic red-pink sandstone, inside are large dining rooms in the mountain bed, with the original purpose still being an unsolved secret. 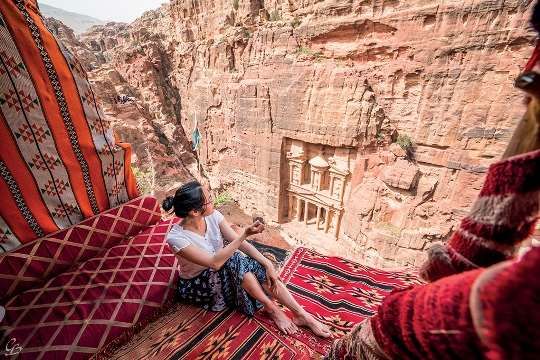 Petra is not only a thousand-year architectural works but also a harmonious combination between a culture that had once grown to the peak and the majestic nature.
I was still watching the elegant and elegant ancient Greek architectural facade designed with perfect proportions. All details are in the right place, picky but not cumbersome. That was more than enough to fascinate people, but the dawn even more sharp on the stone surface, making them beautiful pink. What a miracle! I have a crush on Petra like that! 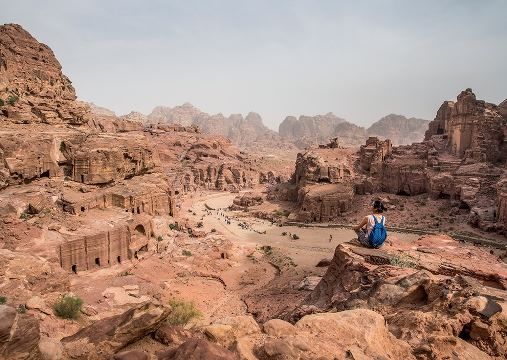 Endless steps take up places with wide views.
DEEP INTO THE CITY
If group tourists to Petra for a day usually stop in front of Al-Khazneh, I follow the wanderers to continue into the city center. Petra Center is spread along a wide avenue paved with large, Roman-style slate. From here, the large architectural works are planned based on the structure of the mountain gorges deep in the natural valleys, radiating from the four sides. With their talents, the Egyptian, Greek, Roman and Nabatean architects all contributed to building a magnificent Petra, which partly still exists today. 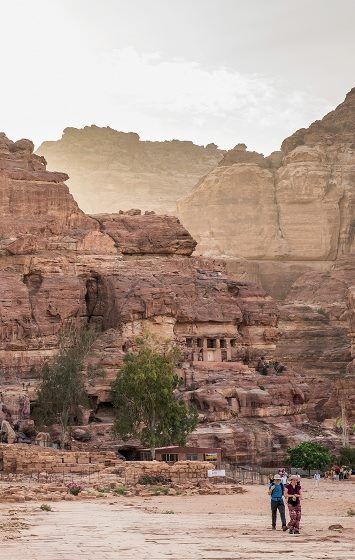 Petra center in the sunset.
For decades, Petra was mistakenly thought to be a city of spirits because of the scale of temples and mausoleums. Like many other ancient peoples, the Nabateans took the eternal world very seriously. They have faith in the two types of souls of each person: rouah – the “breath”, which is spiritual, will return to the fairy realm after death, and nefesh – the soul bearing the personality of the deceased, continues exists in the tomb. Therefore, the massive burial structures on the surface of most of the high cliffs surrounding the city make us think of Petra as a giant cemetery. However, Petra was once a living city. It’s just tents, warehouses, shops, camel caravans, and remains of the nomadic Nabatean lifestyles that have been lost after centuries of neglect. 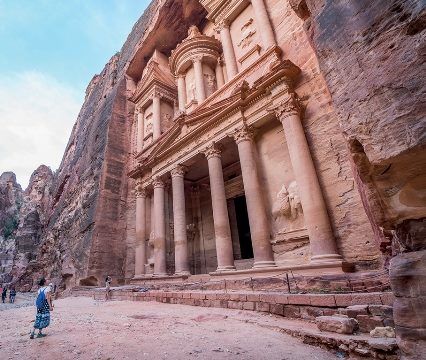 More than 6 am, Al-Khazneh quietly welcomed the dawn.
Leaving the main avenue, free from the cries of the Bedouin souvenir stalls, I was busy walking on countless treks to the farthest points in the city. The trails, mostly hewn up into steep slopes, took me ascent, to the points that cover all the valleys that make up Petra. May is still the end of Spring in Jordan. The oleander trees in bloom along the stream banks were drying up, preparing for a hot summer. For patient guests, at the end of a series of endless rows of stone staircases, The Monastery, in Arabic Ad-Deir, means “monastery” will pick you up on the other side of the city. Ad-Deir was built around the 2nd century AD. This is also a tomb with architecture similar to Al-Khazneh, but trimmed with more square proportions, creating a feeling of solidity, solidity and majesty. 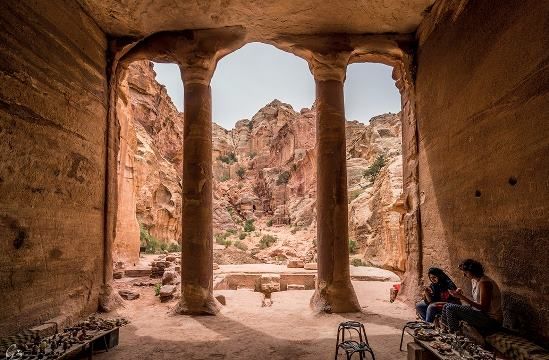 Ancient Greek architectural temples have chambers and pillars carved into the sandstone floor.
Discovering Petra is about discovering surprises after every turn. Petra is not only a thousand-year architectural works but also a harmonious combination between a culture that had once grown to the peak and the majestic nature. I went from surprise to surprise. At times, admiring the beauty of a pink cliff with five colors, right behind it is a quiet Greek temple, with harmonious structure and almost intact preserved. My mind immediately left the bizarre rock formations to stray into an ancient, breathtaking mysterious world. Another moment, standing in a daze on a mountain ledge, watching the afternoon sunlight shine a golden sunlight like honey on the front of the “royal” mausoleums, I was again fascinated by a flock of camels running past, spreading dust over them road below. The scene is suddenly tinged with sand like in an old nostalgic film. My heart is like someone squeezed. So beautiful! I am living in a dream. 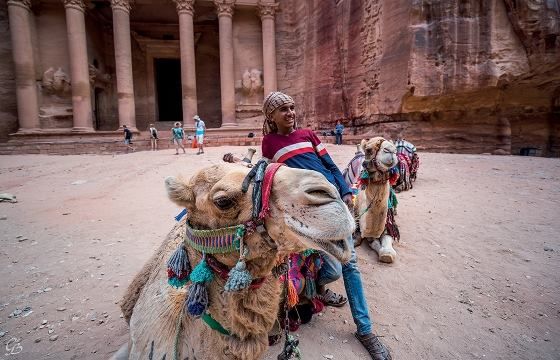