If You Have Any Of These 5 Traits, You Have Impressive Integrity 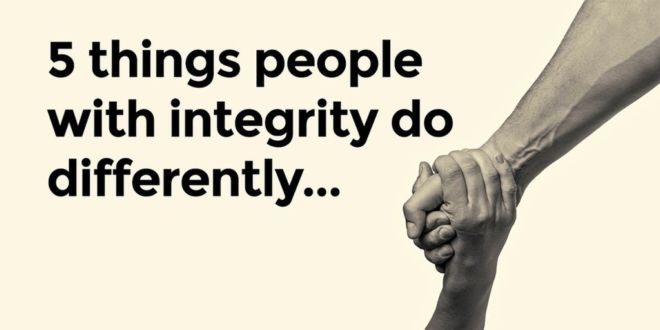 Have you ever noticed the unmistakable presence of a person with high integrity? It’s as if the air about them is inherently attractive.

What’s great is that you can achieve this same effect for yourself if you so desire to. Being a person of integrity isn’t easy, but it’s something that everyone should strive for. It requires honesty, sincerity, and a strong sense of self.

These people are the role models we look up to. They’re our most trusted companions, lovers, business partners and good samaritans.

And they do things just a little differently than others.

If they give you their word, you can count on it

Flakiness is often a trait that nobody desires. I used to be extremely flaky, always making plans just to break plans. But then I realized how that made me look. People with integrity make sure others know that they stand by their word. If they make a promise, you can be sure that they will follow through.

They know what is right, and they’re not afraid to stand up for it

People with integrity are a bully’s worst nightmare. They don’t put up with insults or degrading language, and are known to stand up for people who can’t defend themselves. Their moral compass is precise; they know what’s right and what is wrong, and have a deep conviction for balanced justice.

They live by the same standards that they expect from others

One key part of evaluating ourselves is by measuring how much we practice that of which we preach. If we hold others to higher standards than we ourselves live up to, where is the fairness in that?

Judging others is easy. People with integrity aren’t interested in judging others, they’d rather raise them up, even if it means admitting their own flaws and imperfections. They’re trying to grow just like everyone else.

They take ownership of problems that aren’t their own

Taking on the role of leader isn’t usually something anyone wants to do. When you’re the leader, it means you’re responsible and accountable for what happens. Those with integrity know this, and take on positions of leadership anyway.

Especially when it comes to problems that are not their own. For example, a person with integrity who’s hiking through the mountains might see a great deal of trash on the trail and decide to pack it out with them, even though the mess wasn’t theirs to begin with.

They choose to act sooner, not later

If someone is in trouble or immediate danger, a person with integrity isn’t likely to wait around for someone else to take action. They’re the first ones to jump headfirst into dangerous circumstances if it means helping another person.

As NASA mechanical engineer Roger M. Boisjoly says, “If good and knowledgeable people observe wrongdoing and simply turn away to protect their own self interests without attempting to correct the wrongdoing, they become part of the problem.”