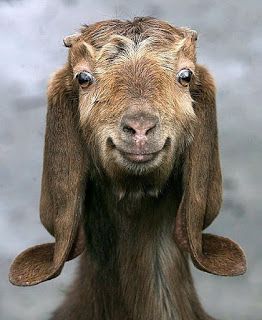 It all started one lazy Sunday afternoon in a small town near Toronto in Canada. Two school-going friends had a crazy idea. They rounded up three goats from the neighbourhood and painted the number 1, 2 and 4 on their sides. That night they let the goats loose inside their school building.

The next morning, when the authorities entered the school, they could smell something was wrong. They soon saw goat droppings on the stairs and near the entrance and realized that some goats had entered the building. A search was immediately launched and very soon, the three goats were found. But the authorities were worried, where was goat No. 3? They spent the rest of the day looking for goat No.3. There was panic and frustration. The school declared a holiday for the students. The teachers, helpers and the canteen boy were all busy looking for the goat No. 3, which, of course, was never found. Simply because it did not exist.

We are all like those folks in the school – we may have our own goats, but are obviously looking for the elusive, missing, non-existent goat No.3. So instead of making the most of what we have and focusing on our strengths, we worry about the missing piece – our shortcomings.

Our mind is so programmed to see the things to completion, a continuity and a carry forwardness. If this is denied then the program gets messed up. An absence of something is always larger than presence of something.

Do the best you can with what you have and be grateful for what you get. Success and happiness will come your way. Stop worrying about goat No. 3!