Being at festivals is like standing inside the mind of a culture as it dreams. They have the ability to be both extremely intimate and public spectacles at the same time. And in India there is no scarcity of festivals. Being such a diverse nation in all possible aspects, festivals around India depict diverse religious and social beliefs of the people.

Of the well known and celebrated across the nation are Diwali, Holi, Christmas. But there are some regional festivals which are as famous as others and also quiet quirky. Festivals are at the heart of people’s faiths and they put a lot of mind and effort in making these carnivals memorable.
We have grouped together 8 of India’s off the wall festivals.
So dive in! 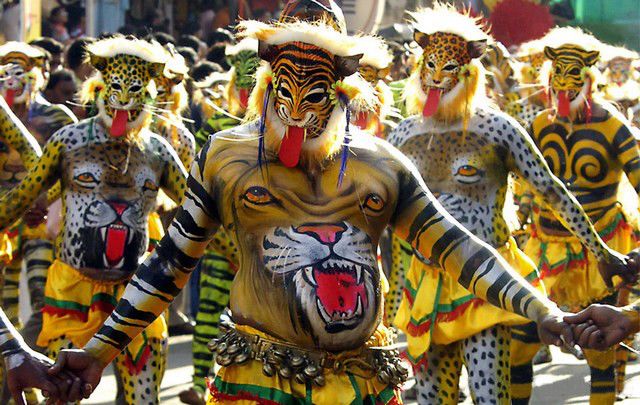 Onam is one of the most ancient Hindu festivals which is still celebrated with a great devotion. Onam marks the homecoming of King Mahabali, a legendary king, who ruled Kerala in ancient times. That period was believed to be the golden age of Karala, people were happy, free from harm and complete harmony and prosperity was there. This golden age ended when Vamana (an avatar of Lord Vishnu) pushed King Mahabali, deep into the earth. Satisfied by Mahabali’s honesty and generosity, the lord granted him a wish that he can visit his kingdom and dear subjects once in a year. 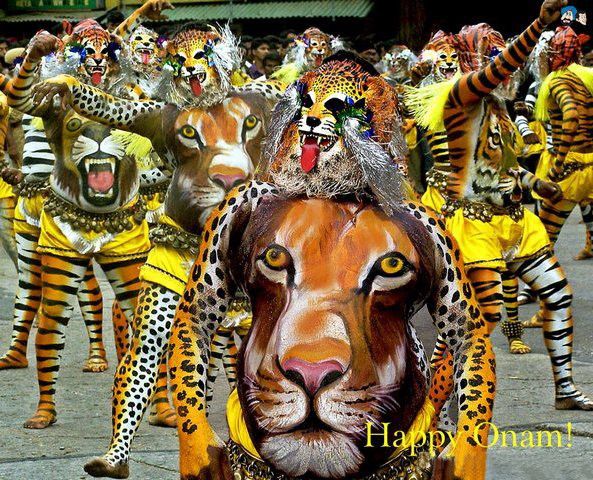 Every year, during the Onam Festival, a curious activity takes place at Swaraj Round in Thrissur. The tigers come to town! Pulikkali, a traditional Kerala art form said to have originated in the late 18th century, sees people dress up as tigers. The name Pulikkali means “tiger play” or “tiger dance”, and that’s exactly what these man-tigers do. The best performer is selected out of the hundreds of participants.

The dressing up process is long and tiring, and requires a great deal of patience. Bodies must be shaved before the first coat of paint is applied. It’s left to dry for a couple of hours, and then the second coat of paint is put on. Dancing like a tiger while dressed up in such a manner is no easy feat either!