Even though Aasha, a Bengal tiger cub, was 9 months old, she weighed only 30 pounds which would only be normal for a 3-month-old cub. The poor thing belonged to a travelling circus where she was not only mistreated but also picked on by a much larger tiger. Luckily, Vicky Keahey, founder of Texas’ In-Sync Exotics Wildlife Rescue and Educational Center, took her under her rescue’s care back in 2011.

“Aasha’s bald spots covered almost her entire body and her skin was dry [with] cracked, darken areas and bleeding,” Keahey told The Dodo. The cub was suffering from ringworm and had open wounds. “Every day, twice a day, I would go in and give Aasha medications and spend time with her.” She would also give her medicated baths, which she disliked so much that Keahey had to chase her after. But Keahey’s efforts paid off. After 8 weeks of treatment, Aasha’s fur began to heal and she became fond of swimming! “Within eight months she looked like a real tiger.” Aasha was then introduced to a bigger tiger named Smuggler who “went crazy for her and was always showing off for her.” Now the two live in the same enclosure together and Aasha is a healthy and very much loved tigress!

This 9-month-old tiger was so sick, she weighed 30 pounds when she was supposed to weigh around 120 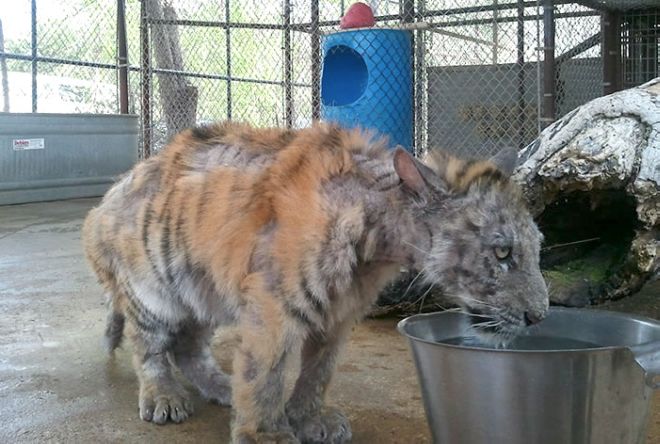 When she was rescued from circus, her “bald spots covered almost her entire body and her skin was dry [with] cracked, darken areas and bleeding” 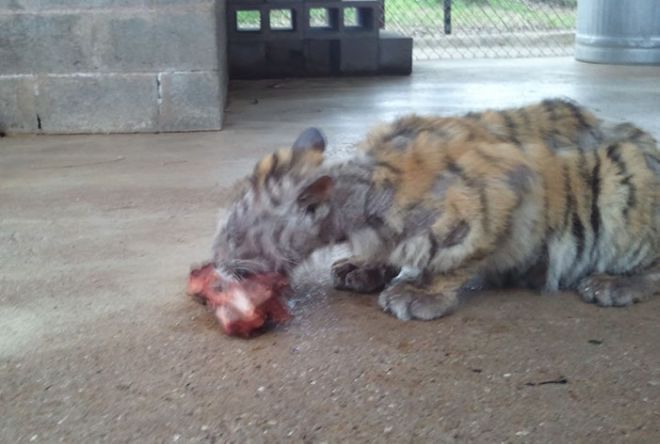